From Plough to Profit... 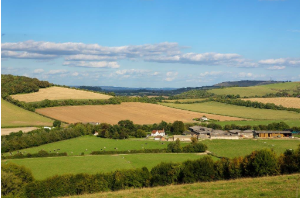 RH & RW Clutton has recently concluded a long-standing land agency brief for the private owners of a tenanted dairy farm near Burgess Hill, going back some 45 years.  Thanks to its strategic location on the town’s western fringe, the farm proved to be exceptionally well placed to realise value from a growing demand for rural land to provide housing, employment and community facilities for an expanding population in this part of Sussex, lying in a relatively unconstrained landscape between the South Downs and the High Weald AONB.

In the 1980's some 75 acres of the farm, including the original farmhouse and buildings, was lost to development.  The firm acted at the time for the landowner, in conjunction with London surveyors, obtaining planning permission and negotiating the sale of land for development.  A new farmstead was designed and built for the tenant under the firm's supervision.  Faced with a reduced acreage, the tenant gave up milk production and turned the farm over to sheep and beef with some cropping.  In the 1990's a second tranche was taken, this time for more development, including a new school and leisure centre for the local authority.  The holding was then down to under 100 acres of secondary-grade agricultural land, split by a new link to the A23 London to Brighton road.

From 2005 there were indications that yet more land was needed for development at Burgess Hill.  To that end, our client was advised to enter into a promotion agreement with one of the national companies which specialise in this form of joint venture.  Some ten years later, coinciding with the adoption of a much-delayed new local plan for Mid Sussex in spring 2018, a deal was struck under which the remainder of the farm has been sold to a public body for an undisclosed sum.  This Government-backed quango has acquired other landowning and developer interests across a swathe of land known as the Northern Arc.  At a stroke this solves the knotty problem of "equalisation", commonly experienced on a strategic site held in multiple ownerships, each with its own legal and tax issues.  Some 3,500 homes are expected over the years ahead, with new business/warehousing units for employment use, new schools, sports centre, public open space and so on.

For a land agent, this long-running instruction has encompassed the whole range of estate management skills from agricultural landlord and tenant, including negotiating the surrender of a protected  AHA tenancy, to advising on and monitoring a promotion agreement, providing periodic valuation advice for the client’s tax-planning, introducing and working with solicitors and other professionals, dealing with ongoing management issues of a tenanted farm under constant threat of development and keeping the client fully informed at all stages.